Bay Area artist Lou Bermingham has been creating art for over 25 years while also pursuing further studies in his art and martial arts practice in Egypt, Morocco, Japan, Taiwan, and France. Lou has exhibited his artwork in the USA, France, and Cairo, Egypt, as well as in New York City and has an international clientele from San Francisco and LA to NYC and Paris and from Tokyo to Sydney, Australia.

Preston Metcalf, Chief Curator for the Triton Museum, states, "like our prehistoric forebears, Bermingham . . . is standing on the edge of the abyss and portraying realities beyond the seen." Dr. Peggy Adeboi, Art Historian and Professor, USF, SLU, and UMSL, says, "Lou’s art expresses images from the imaginal realm, where dreamlike forms embody cosmic forces. Their energetic expressions draw us into our own inner landscape and sensuously contemplative journeys."

Silicon Valley clients Mike and Elaine Hamilton have a sizable collection of Lou’s artwork. Elaine, VP of Worldwide HR, Marvel Corporation says, "We are in awe at the depth of color and drama in Lou’s artwork. We feel fortunate that we can view these pieces often and that we made a great investment in a rising star."

In Paris, the accounting firm Cabinet Arca and Laurencin Architectural Associates are among his collectors, as well as architect Louis Canizares, Director of Dessein de Ville–Architects/Urban Development of Toulouse and Bordeaux.

Lou finds his artistic inspiration through visual and kinesthetic means: "After years of creating paintings, drawings, architectural glass panels, and installations, I had a dream in which I saw over 200 images—completed artworks—flashing across my dreaming memory. When I woke up I painted the first one I could remember and have been influenced by this vision ever since. So my art is influenced by dreams, my Aikido training, Egyptian and Asian artwork, and natural imagery found while exploring caves."

Lou is a 5th degree black belt in Aikido and taught for 25 years through his Aikido school, Aikido of Los Gatos, before stepping down in 2010 to focus more exclusively on his artwork. He continues his Aikido training with his own teachers, Jack Wada–Shihan of Aikido of San Jose and Robert Nadeau–Shihan, as well as other noted Aikido teachers.

Lou lived for a year in Cairo, Egypt, and has traveled throughout other parts of Africa. He has traveled through Europe, Israel, Mexico, Taiwan, Korea, and he has spent time in Japan. Lou graduated with a B.A. in Fine Arts from San Jose State University (SJSU). He studied drawing and painting at the Ecole des Beaux Arts in Aix–en-Provence, France during his university studies. Lou was in the artist–in–residence program at the Vermont Studio Center in Johnson, Vermont, a recognized and innovative artists’ community.

Throughout his travels, Lou has connected with different artists, educators, architects, and designers in his efforts to develop a worldwide consciousness about the restorative and regenerating power of Art. 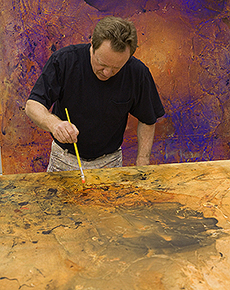 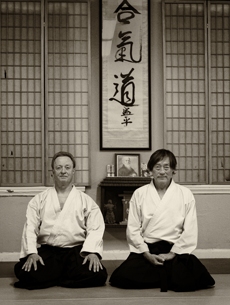